Veterans Day: The Forgotten History of America's Veterans Day and What It Commemorates

Veterans Day, celebrated each year on November 11th, was first celebrated on this same date in 1919, under the name of Armistice Day. The holiday was named in remembrance of the temporary ceasefire that brought about the unofficial end to World War I when, the year before, the Allied forces entered into an armistice with the Germans, stopping live battle on the 11th hour of the 11th day of the 11th month of 1918.

A year later, and nearly five months after the official end of the First World War (which occurred on June 28, 1918, with the Treaty of Versailles), President Woodrow Wilson proclaimed November 11th the first commemoration with the following:

“To us in America, the reflections of Armistice Day will be filled with solemn pride in the heroism of those who died in the country’s service and with the gratitude for the victory, both because of the thing from which it has freed us and because of the opportunity it has given America to show her sympathy with peace and justice in the councils of the nations…”

He called for parades and public gatherings and a brief moment of silence at 11a.m. Two years later, on November 11, 1921, an unidentified American soldier was buried at Arlington National Cemetery in what became known as the Tomb of the Unknown Soldier.

Continue reading Veterans Day: The Forgotten History of America’s Veterans Day and What It Commemorates at Ammo.com

The laws Lincoln broke for example, to win his objective, no different than what politicians are doing right now this moment to win their objectives…

Every WW1 general and commander who fought their troops till the last second of 11-11-11…
Should have been taken out and hanged till dead.
Sure explained why “fragging” became a thing.

The Military channel had a great series on WW1

Canadian Pacific (CP) unveiled five specially painted locomotives on Remembrance Day in Canada and Veterans Day in the U.S. honouring the culture and history of the armed forces. The five Electro-Motive Diesel SD70ACUs will take the message of military pride across the CP system.

“As a leading employer of veterans, CP is proud to commemorate military machines and the brave men and women who’ve operated them in conflicts around the world,” said CP President, CEO and veteran Keith Creel. “As these locomotives pass through communities across the CP system, I hope those who see them will reflect on the sacrifices made by so many of their countrymen to protect and defend their freedom.”

CP personnel carefully studied the paint colours and patterns that branches of the Canadian and U.S. militaries applied to tanks, planes and warships. Based on their research, they devised five liveries for these locomotives:

Four of the five locomotives bear a Canadian flag on one side and American on the other. CP operates in both countries and employs veterans of both countries’ military services.

“We are proud to support our veterans and the invaluable skill and experience that they have gained serving their country,” said CP Senior Vice-President Engineering, Mechanical and Procurement Scott MacDonald, a veteran. “These locomotives are a symbol of our support. They will operate in regular service and further support our commitment as a proud employer of veterans in Canada and the United States.” 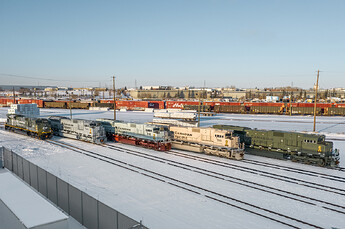