You didn’t think your membership dues all went to actually fighting for our gun rights, did you??

membership dues go to the general operation fund and that is easily spent on day to day operation, outreach, education, basically those things that the NRA have and should always be focused on. membership dues have really never went to anything as far as a direct preservation of the second be it court cases, lobbying, etc. what we are talking about is the NRA-ILA, not only with misuse of funds but starving them in general is donations, contributions and fundraising. and, sadly, most of that is on a industry/political/financial level that the rank and file members can’t do a whole lot about. this is where control of the board would be helpful. but alas, the deck is heavily stacked there by the old guard who is very loyal to the jackwagon known as LaPierre. as much as it would hurt the noble efforts of the actual NRA… it would be nice if there were smoking guns found to incriminate LaPierre and his board cronies in some type of illegal finacial dealings. With the suit against Akerman McQueen, sure looks like a possibility too and is why they are circling the proverbial wagons. But then there is a rub there too. For too long AckMc has had way too much say and too much control over the direction and messages of the NRA-ILA which has directly affected in a negative way the actual efforts of the NRA. Most people don’t, can’t or won’t even consider the separation of the two. I guess what I am saying is… complex mess much? Thanks LaPierre! Thanks AckMc! Thanks old guard!

I was disgusted when i heard the salary Peppie LaPierre was pocketing every year, this new info released (if true) is REALLY disheartening. He needs to go!!

Just flithy in my opinion, considering what these organizations pretend to stand for!

Isn’t the corruption what Ollie North was trying to come out with when he resigned? I heard they got to him before he could get his info straight.

Disclaimer: not an NRA member.

Lifetime Endowment Member here. But have refused to donate any more. They are not what they used to be. Donate now to GOA and CRPA.
Disclaimer:CRPA is an affiliate of the NRA but it’s easy to see that they are well involved with (attempting to) fighting anti gun shit at the Ca state and local levels.

Also joined the ISAA in Idaho. My future home state.

I remember when the mill went on a lockout, lasted a 1 1/2 years. Our CEO received 1 million for a bonus!! I lost everything moved to FL and went back to school!!

Most of the charitable orgs CEO get a butt load but the Salvation Army is one of the good ones. 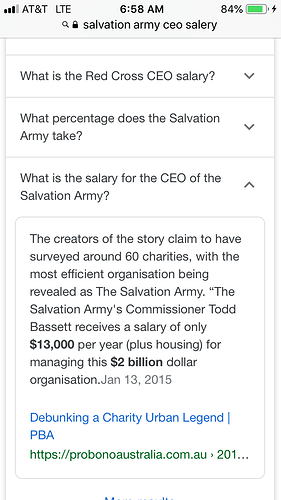