What are some good semi auto 5.56 rifles?

Im curious what other semi auto 5.56 rifles are out there besides AR15s, AK101 type rifles and mini 14s? When I say “good” I mean accurate,reliable as a defensive firearm, and durable enough to go at least several thousand rounds without parts breaking. A couple years ago I owned an ACR but the platform appears to be dead now, which is disapointing.

Great topic. I’m curious about this as well.

I’ve got the tavor bull pup. Personally I think it’s set up perfect and I like it better than my ar15 's! I’ve got over 2500 rounds through & have never had any issues with it. Pretty accurate with 18in barrel & has been flawlessly reliable for me.

Defensive you say, so that means with defensive ammo out of a 16" barrel for the <100m threshold? That pretty much limits your ammo choices to M193, maybe TBBC (if you can find and afford it).

Not a semi auto but Remington made a pump gun based on the 870 action that will take ar mags.

That’s interesting. I cannot find it online, do you remember what model it was?

I just purchased a FN15 (M4) with the 16" government profile barrel. This is just the regular FN15, not the Military Collector’s series. List price is around $1,099.00 and I was able to find a sale for $679.00, plus tax, here in Phoenix. The version I received didn’t have the big painted on FN billboard logo on the mag well (thank God), use normal FN and FN15 markings near the serial number.

The rifle has a flat top rail and came with a FN 30 round magazine and a removable Carry Handle that fits on the flattop rail. Government profile barrel with the “step” for the M203 mount.

Unlike a lot of FN products this does not have a hammer forged barrel, but a government spec button rifled barrel. For those that don’t know, hammer forging is great for durability and service life in a machine gun. For carbines and rifles, button rifling provides better accuracy and is what is spec’d on the M4A1 versions that the government buys.

The fit and finish on this rifle is first rate and makes all of the 6920 Colt’s I have seen look like poorly finished junk. This doesn’t affect function, but having a gun that looks nice is a bonus, especially as the retail price of both is about the same. Both companies sell their guns to the military and both commercial offerings appear to meet or exceed the Mil Spec. The upper and lower receiver fit were tight as were the takedown pins.

Although I have shot a lot of M16/AR15/M4’s over my lifetime, I’ve never owned one, until now. Colt, Bushmaster, LMT are the brands I have fired and all were either stock M-16 or M4 configuration.

So a couple of things about the FN, accuracy with a non-free floated barrel at 100 yards, benched, was minute of angle or less. If the shooter does his part with the iron sights, 1" - 5 shot groups are the norm. I had several small 5 shot clusters at 100 yards. Temperature, 78 degrees, no wind, 1,500 foot altitude. Ammo was 55 grain Wolf Gold (thanks Tim).

It should be noted as well, the gun was sighted in from the start and no elevation or windage adjustments were necessary. It appeared to be battle sighted to a 25 yard battle sight zero, as it was slightly high at 100 yards, which was the range distance on the range.

The trigger was stock GI, but felt good, not match grade, but I don’t think I’m going to change it in the short term, as it just works.

So far, I think this is a good buy and a quality rifle. For the sale price of $679.00, I don’t think I could have done better with another gun.

I have a FDE FN tactical with a “match grade” CHF barrel and A Scar flash hider. I really like the FN, it is definitly nicer then my Colt 6920.

If you want to rule out the AR-15, AK’s and Mini’s, then I would say the Tavor, ARX and SCAR for a defensive firearm are great choices. Combat accuracy (SCAR the best in that category), very dependable, and will eat any NATO spec 5.56 or commercial .223 ammunition. There are others as well but these are definitely top notch IMO and very available.

Right now you still can get a Beretta ARX100 for under 1000.00 the rest are all more expensive options galil ace, CZ BREN, FN SCAR.

I wish I had some trigger time behind one to tell you about them… I know that I want one!emphasized text

The older ones are decent but really just a over priced AK variant in the end. Accuracy is so-so, along regular AK expectations, and they are a bit on the heavy side.

Haven’t had a chance to get my mitts on the new version but they seem pretty good and accuracy appears to be a bit better. The price, for me at least, is a bit of a turn off and for what they are asking I would go with one of the Tavor models.

And you can switch the ejections from left to right in 1 second! I can’t wait to shoot mine, they have a heavy trigger and are 2 MOA accurate. 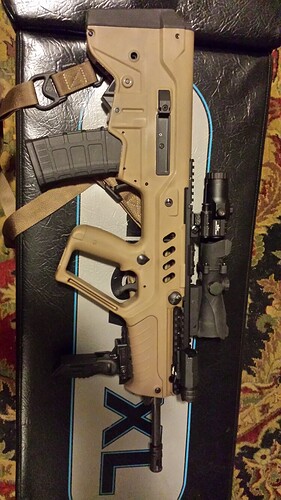 If you got money let’s look into a FN FNC! Ever seen the movie Heat?