What are your plans for Memorial Day?

I never know what to wish someone for Memorial Day. For me it’s not a happy weekend or day, more of a day or remembrance and not at all a happy one. Yet I hope yours will be a happy one.

I watched the movie “Memorial Day” last night and while that wasn’t my war it had meaning. I’ve been spending some time watching the History Channel and again, not my war, but it was the war my uncles took part in. They have long since passed away and I wish they were still here.

My war was Vietnam, and while my training allowed me to choose where on the planet I wanted to go I didn’t choose Vietnam. But that doesn’t mean I don’t know folks who went and served and lost their lives there. Tonight if I dare to I’ll probably watch “We Were Soldiers” which is definitely my war and my people. No doubt the TV will get blurry at times, same as the keyboard is losing it right now.

I once had a co-worker ask me why I never participated in any parades on this day. I just can’t bear to.

So happy or not, how will you spend your Memorial Day?

Usually today is spent riding in the Rolling Thunder parade in DC. This year because of the China virus it is canceled. There is a group of us vets that meet up almost every year to go ride to DC and ride on the parade, visit Arlington, and visit the memorials. Miss my yearly trip and riding with my friends.

Working then drinking. I honestly dont feel civilians like myself should be celebrating memorial day unless its for remembering a dead relative or friend that served.

I usually think of my grandpa though he didnt like most holidays including this one. Gossip in my family was he lost a really close friend in Korea and didnt even like acknowledging his service asking him about his service I hear offended him. He was a proud cop after that though. Complex old school guy that I miss dearly.

My younger brother was in for a short time (Navy) and AFAIK knows no one who died in uniform. He has a happy Memorial Day with fireworks and friends over for grilling and adult beverages. It works for him and I don’t begrudge anyone a similar form of celebration. My point is that especially this holiday, people feel it differently and that’s OK.

I also focus on the remembrance aspect .

@BrianK did you watch wwll in HD on the history channel? If I see a marathon of these series I am watching all night.

Working on my bathroom this year.

Probably watching the Indy 500 if it doesn’t get postponed.

Same here brother.
I’d usually ride up from Fla with The Pierson crew.

I watched what I could between other things that had to get done. Vietnam is on today.

Had some watermelon, took my 7 year old out for an overdue birthday breakfast at Wendy’s, shopping some, gonna work on kids bikes, glad to remember those who gave much

Been watching a bunch of war movies since yesterday…good ones, not crap.
It helps me to remember the sacrifices that all those veterans made, both physically, and emotionally.

I also did some more research on my Grandfather (WWII Navy Vet) and finally learned that he was assigned to LST 464 (been trying to find that out for years since he wouldn’t talk about the war) he saw action in the Pacific during the Leyte campaign, those experiences scarred him for life.

I have a long family history that goes way back to the first settlements on American soil, and with that history, a bunch of ancestors that fought in the American Revolution, The war of 1812, the Spanish American War, multiple Native American conflicts, the Civil War, WWI, WWII. I think about them, their stories, and what they sacrificed for me.

Vietnam was my fathers war, he did not serve for medical reasons. I grew up knowing many Nam veterans and many of my friends throughout the years were Nam vets. I remember all of them that have passed on, that I still miss.

I just try to remember what this day is about. I hope the next generation doesn’t forget.

Went to the family cemetery yesterday with most of the family that still lives in the area. We decorated graves and did some cleanup and cemetery business . Today we are at home doing yard work.

Wife has to work. It’s rainy and drizzly outside, so I’m at home looking after my boys.

Today I remember and honor those who fought and sacrificed themselves for our country. None of my family who served died in combat, but a few have already passed on of old age.

My Uncle Juan, one of my favorite uncles, fought and survived the Battles of Guadalcanal and Okinawa. He earned a few First Landing medals and even survived hand-to-hand combat. He admitted to crying when he reached into the pocket of a Japanese soldier he killed and found a picture of the soldier’s family.

My Step-grandpa Guilo and Uncle Manolo were drafted into the 65th Infantry Regiment, the last segregated unit of the Army made up of mostly Puerto Ricans. They fought in and survived the Korean War. Interesting fact about the 65th is that a couple of its battalions were part of the last battalion-sized bayonet attack in the history of the US Army when they were ordered to fix bayonets and attack some Chinese-held hills near Seoul. After serving 20 more years in the Army, my Step-Grandpa Guilo retired as a Drill Sergeant. He was also a boxing champion for his weight class in the Army and is one of the toughest men I’ve ever known. He is also one of the funnest men I’ve known who taught me lots of stuff. I miss him greatly. Despite their war experience, neither of them ever mentioned anything about what they went through in the Korean War.

After my Dad completed his residency, he was drafted in’69 and served 3 years as an Army doctor at Tripler Army Base treating sick and wounded military personnel. After he was honorably discharged, he went back to Puerto Rico and had a private practice where he set up a badly needed dialysis unit. Feeling the duty to serve again, he later joined the Air Force and served 17 more years before retiring as a full-bird Colonel and Chief of Internal Medicine at the Keesler AFB Medical Center. At 81 years young, he’s still doing great and is my greatest role model.

My Uncle Billy joined the Marines and served two tours of duty in Vietnam. He was part of a unit that fought its way to Khe Sanh to help his fellow Marines during its siege. He’s also one of the toughest guys I’ve known. He’s shown in a short, one or two second clip at the 1:18 mark neck deep in water with an M16 slung over his shoulder in this video about the Siege at Khe Sanh: 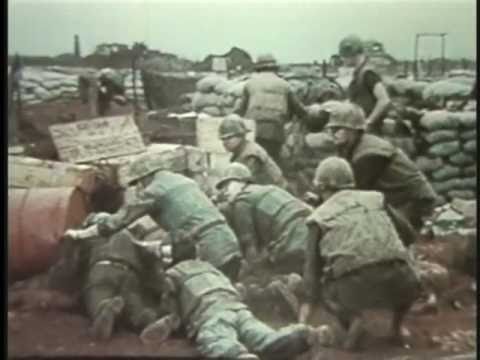 God bless all those who served and especially those who gave up everything.

Part of Memorial Day is knowing what the people who fought did. You should write it down for later generations to know about. BTW, not everyone fought with weapons, even rear echelon folks fought. IMO their stories need to be recorded.