What model Glock would you get

Have P09 in 40 (prefer hammers) and like it a lot. However it is FULL size. Like shooting the 75B (40) more. The reason I want to get the G19 Gen3 is cost, size, ammo and parts availability. I won’t be falling in love with it like with the CZ75B and now the P09. There isn’t any way a plastic Striker Fire could be anything but a tool to me. The G19 Gen3 has quite a few polymer 80 sources out there. Haven’t looked into all that before now.

I’m fond of the 17, but the 19 is a bit more concealable/carry-able, never ran a 45, cheap enough to just buy one of each

If you ever find yourself in CA, the Gen3 is on the roster.

Hasn’t that been struck down? What is its offense?

You can’t get a gen4 or 5 in CA unless you are a police officer or buy it used, because those guns are not on the “safe handgun roster.”

About ten years ago, Commiefornia made a law that semiauto handguns must stamp a tiny identifying mark on spent casings in two places, or they would not be eligible to be added to the roster. Certain handguns were initially grandfathered in, because there was no handgun on the market that microstamped, and this would otherwise be a ban on all new semiauto handgun sales. However, every year the manufacturer has to re-register each model and variant, or it will drop off forever. Since there has still been no such microstamping handgun, and small manufacturers can’t afford to maintain old factory lines, the roster has shrunk by almost half. California handgun tech is behind the rest of the country by a decade.

Last year, a new law made it easier to add semiauto handguns to the list by only requiring one microstamp, but also requiring that three guns be removed from the list with each such approval.

So the reason gen4 and 5 aren’t on the list is because they were developed after the initial set of guns were added to the roster. To get them added would require impractical design changes and regulatory hurdles that no manufacturer wants to bother with. And the CA government has made it clear that they want to get guns out, not let more guns in.

I just checked their list, and the first-ever additions to the “safe handgun roster” were added five days ago on Sept. 1: the HK P2000-V3 US and its SK variant. I haven’t confirmed what makes this California compliant yet, and which guns are going to be erased from the list because of it.

Previously, Franklin Armory was able to add an AR pistol without microstamping or needing a fin grip because it was a single-shot gun (seemingly convertable later to a semi-auto locked-mag config). That’s why I’m not sure whether HK did something clever here or whether they are going to trigger the “delete 3 guns” rule.

I have no need to go to California and if I do it will be a quick in and out as in less than one day in the state. And I can always carry one of my revolvers and stay out of the citys.

Welcome back. Yep I like those Caniks too. Have seen them at good prices recently.

I have look at the caniks but have ruled them out . They may be the best thing going but they are not very wide spread in this area . No police or troopers carry them and I am looking for something that I will be able to find mags and parts for in a shtf situation.

Why I am going with a Glock too for whats coming, if I get there that is… 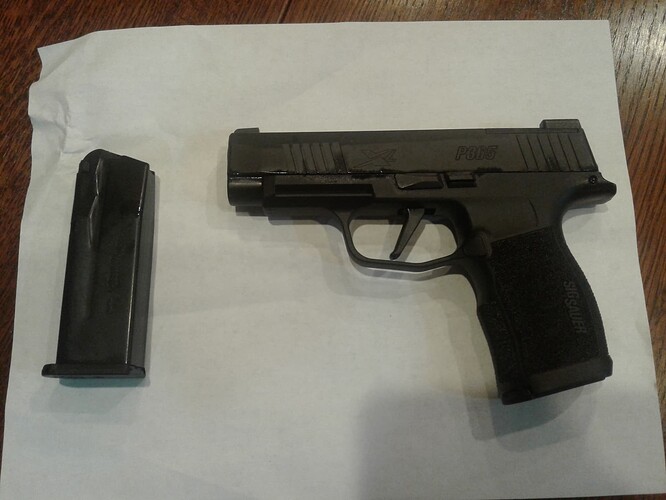 I built a P365X clone. I was going to do an 80% from JSD Supply, but they still haven’t come out with the frame and I got impatient so I bought a frame on Gunbroker. Only difference is mine doesn’t have an optic option since I went with the original P365 slide.

Another option you can do is build a Polymer 80 Glock clone. You can piece it together as you wish and it will take all of the magazines that the OEM counterpart takes. I’ve built several of those and they work really well. I’d still prefer OEM Glock, but they work.