What's in your range bag? Here is mine! - Nighthawk Medic Shoots 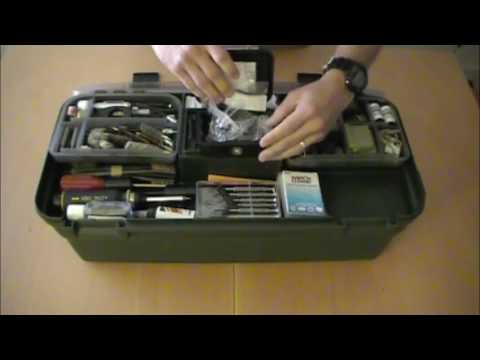 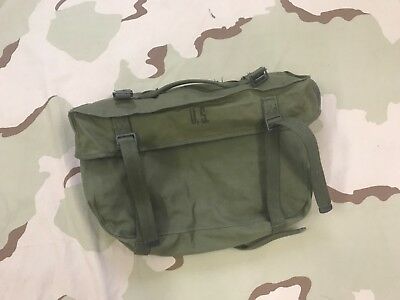 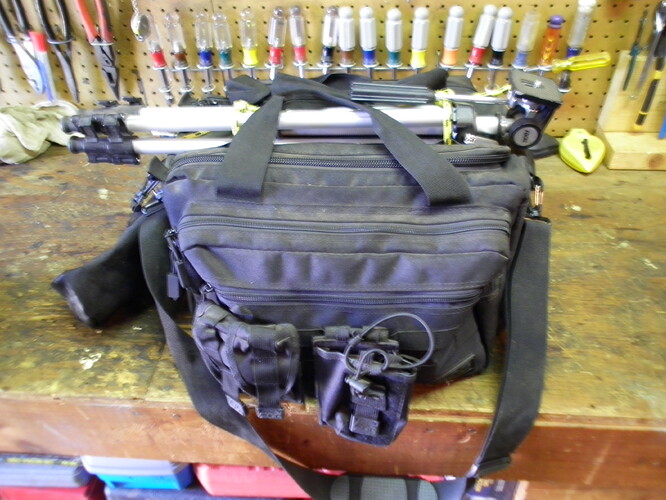 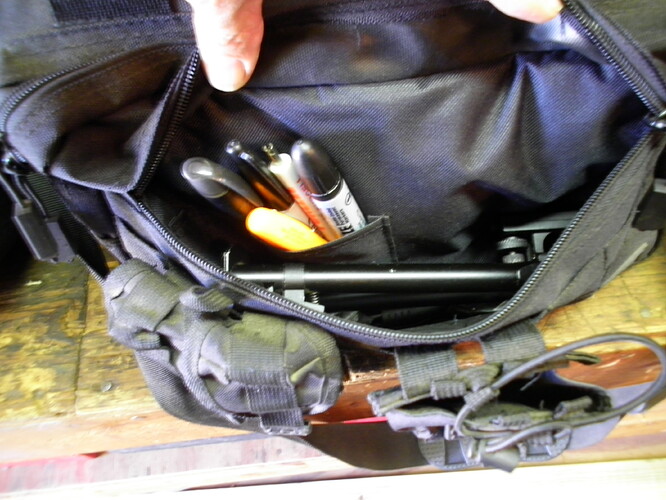 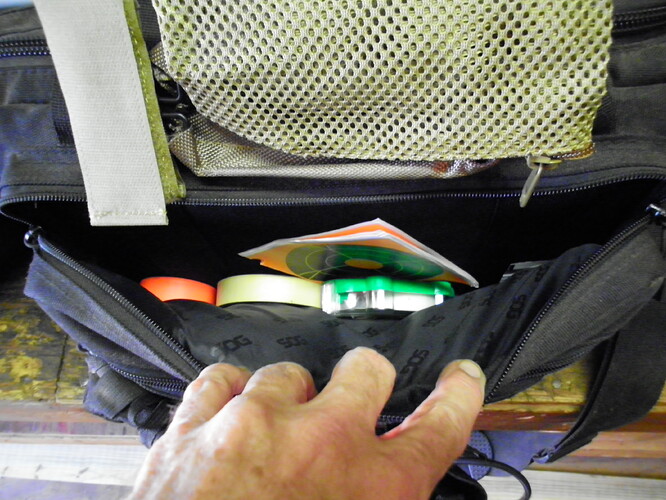 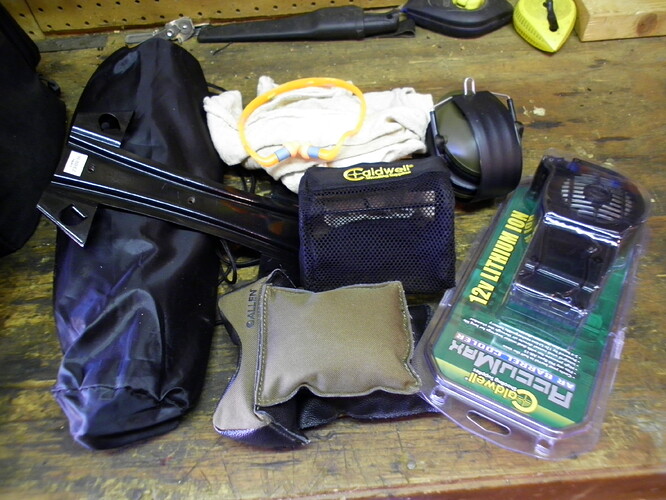 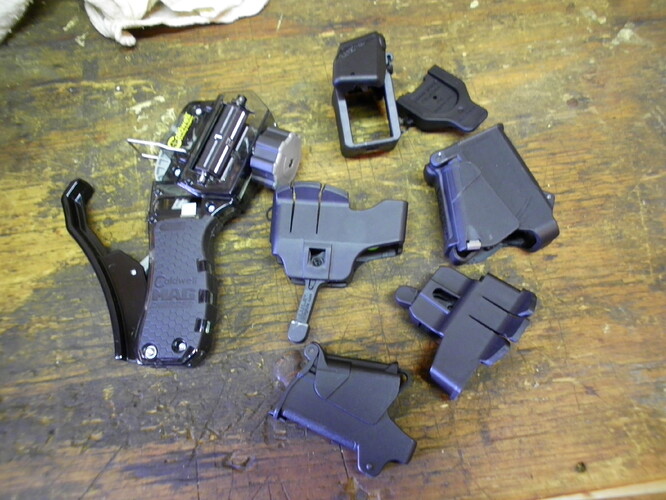 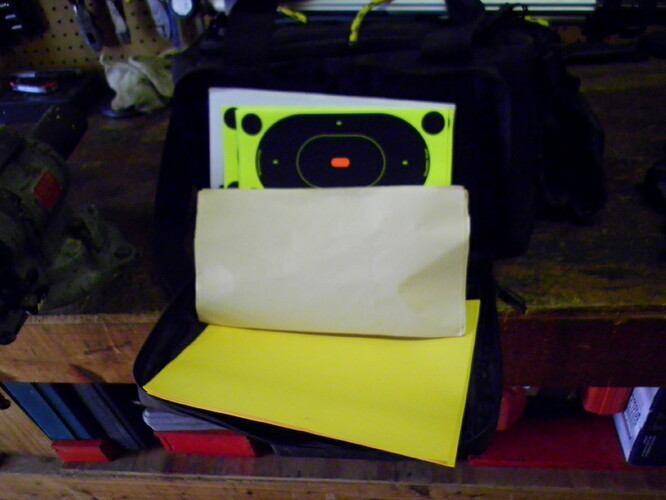 Muzzeloader only, the box is for flinters and pistols only. no pic of the rifle boxes 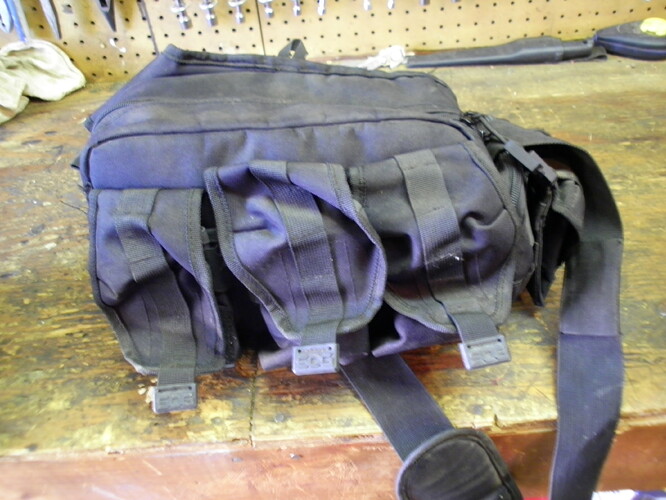 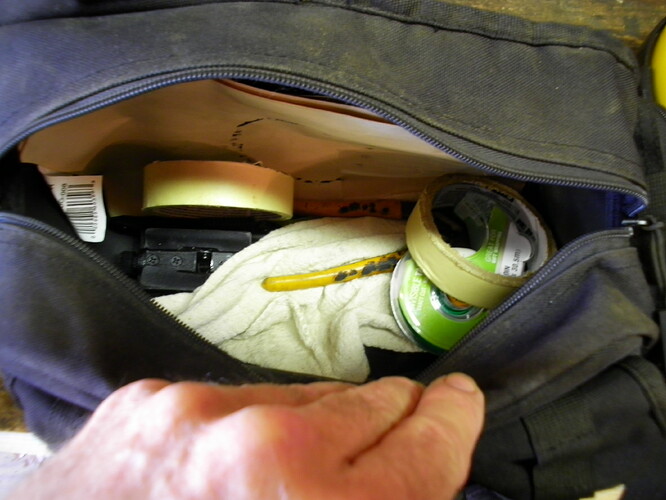 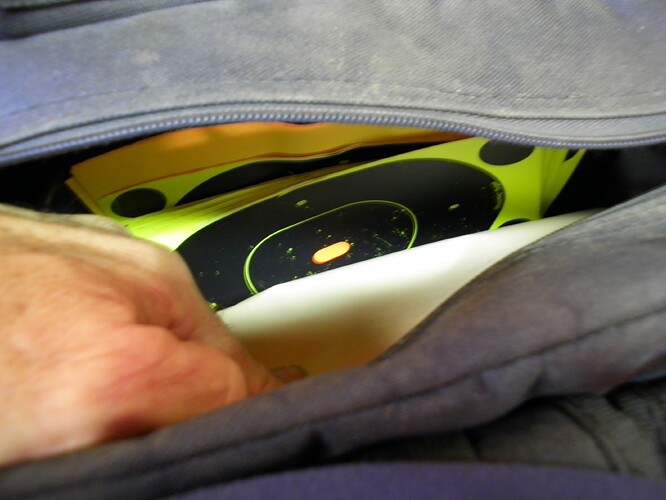 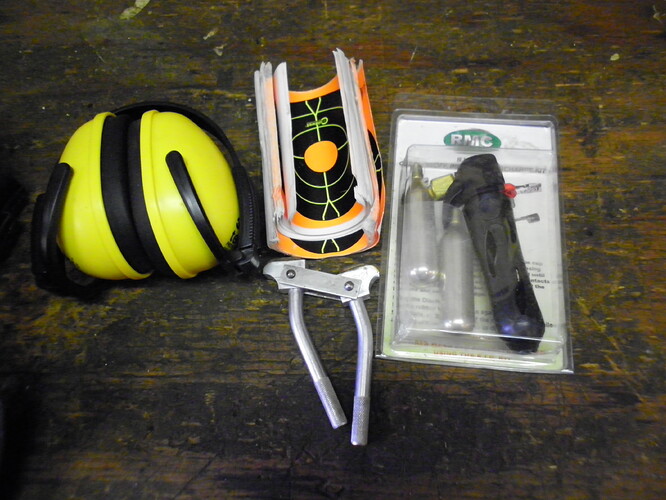 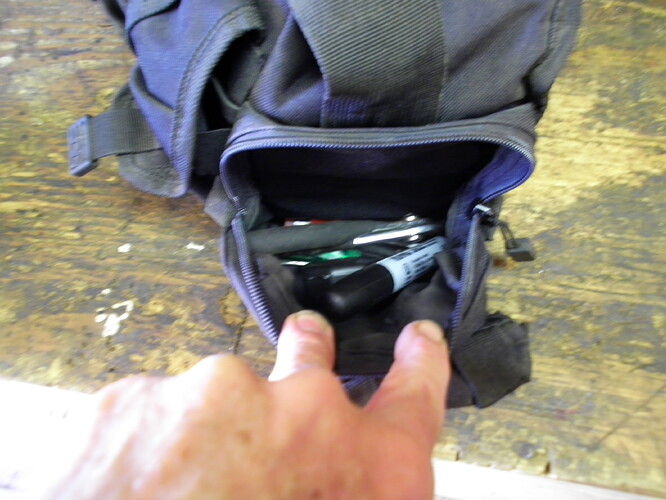 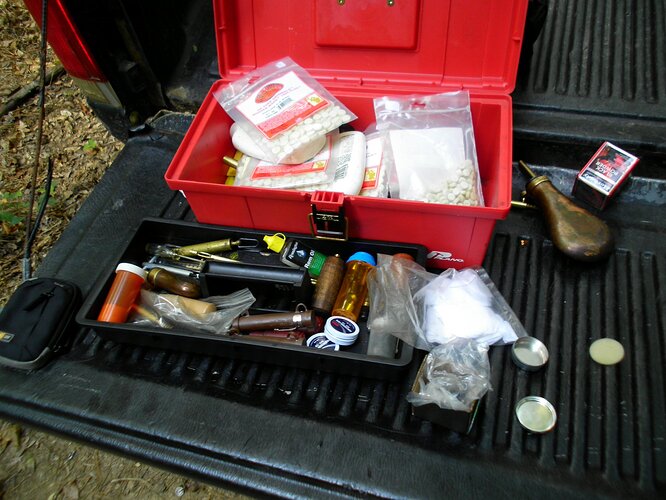 Holy crap batman, I have an entire box just for holy black. 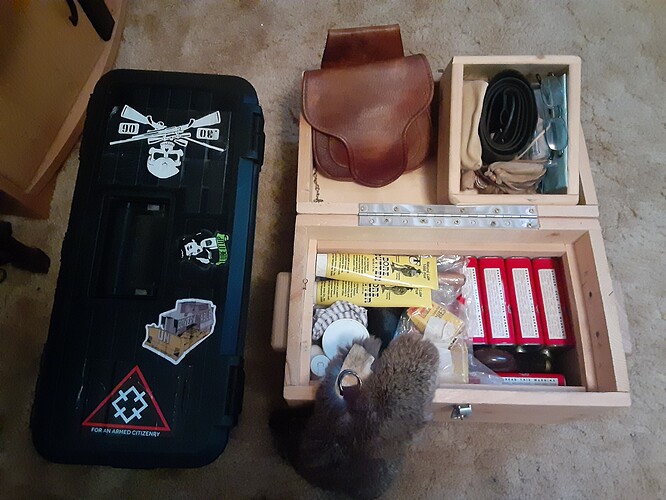 The box on the left is my range box for centerfire.

And I thought I carried a lot! You guys put me to shame! Just not enough shame to get me to carry more. I carry enough now.

Writing that though… This past weekend at the Steel Challenge match a gent I shoot with lots, on the same squad, had a battery in his firearm go dead. No spare and it was a photo battery which I don’t use. I have spares of other cells just not that. But what I did have was my rifle that I suggested he use. We both were shooting 10/22s so his mags would work in it. (I think he liked my SBR)

BTW, I cracked a “B” ranking. Yippee! Last match I got 59.91% and just missed it. One more SC match this year. I’d do better if I practiced.

Great job, brother! I’m still on the razor’s edge of B Class. Hopefully, I will get there before the end of season.

I have an entire box just for holy black.

Think i have about 15 pounds of blacl powder, but i don’t take it to the shootin hole. i take a couple flask fulls.

cracked a “B” ranking

I do miss those matches

I got a rifle range duffle pistol duffle competition wagon.

Hopefully, I will get there before the end of season.

If you have the accuracy you can do it. Just speed up a bit and that doesn’t always mean moving faster. Fewest movements/direction changes (efficiency) pays off and cuts time.

I had a wonderful shooting history that I give thanks for and I also curse. I started with bullseye where I had the fundamentals driven home. Accuracy I have plenty of because of that. Trigger presses are always perfect and so is my breathing. I don’t even need to think about it, it just happens. But speed was lacking and I’m still working on that. It’s very difficult for me to trade a bit of accuracy for more speed. It’s the background in Bullseye and it’s where I’ve been for the past 5 decades. I want those Xs, but they don’t exist in either SC or USPSA. But my mind wants them anyway.

I was hoping to get into B before the end of the season too and I had 2 matches to do it (one to go). My times told me that I could, but it’s an average and not a sprint so it takes good times to average out and increase the %. At least that’s what my imperfect understanding tells me.

Our last sanctioned Steel Challenge match of the season is coming up soon, then that’s it until May(?). I’m looking forward to it. I want to practice Smoke & Hope a bit. It’s a stage where one can REALLY pick up some time! I saw how to shoot it last match. It was as I thought and I mentioned it a month or 2 ago to the person I saw shoot it so well last match. But knowing how to do it and seeing how to do it are 2 very different things. OK, practice helps too, and I don’t, obviously he did. This shooter I watched just painted the targets and shot them in passing. His times were incredible. But I can do that. I’m betting you can too if you have the fundamentals down so that you don’t need to think about them. Its 4 huge targets up close then the stop plate. The 1st four can’t be missed, then slow down for the stop plate. Easy. I can do it and so can you. It’s just a fluid motion.

I’m right handed so I find moving from left to right to be natural. Two huge plates on the left, pass the stop plate, hit the 2 huge plates on the right, then return to the middle stop plate. It’s 2 fluid motions and 5 shots; just paint the targets and use the trigger in passing. The shooter I watched did it in just over 2 seconds each time. He kicked my butt by 7 seconds on that stage and that was the 7 seconds he beat me by for the match. I came in 3rd and he came in 2nd overall. I can do it and so can you SP.

I love SC. Hey, I’m an older gent and I don’t move as good as I once did, so in USPSA, if I can reach B in that I’ll consider it a huge achievement (C now). But in SC I should be able to kick the butt of the young whippersnappers. But I help them if I can. Just like the shooter who showed me how to shoot Smoke & Hope last match. I mentioned it to him and he showed me how to do it. Now it’s up to me.

SteelPinger I want you to make B too.

This’ll give the idea, but I think he’s false starting. The rules state that the gun needs to be pointed at the stake (shovel in this case). His is started in the direction of the first target and not pointed at the shovel. If I was shooting against him in anything but a local match I’d call an official to find out if it was legal start. Heck, it’s a game where split seconds are meaningful,and everyone should be playing by the same rules. 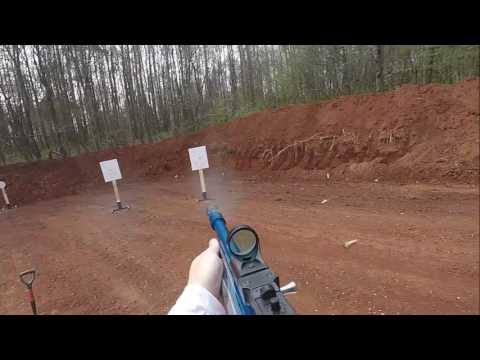 On that subject… I was at a practice where it was said that our scores could be used for ranking. I was first up. I shot well, but had a malfunction and was told to take a “do over” because it was rimfire. I shoot RFRO and malfunctions are part of the division. There is no such thing as a do over. It’s 5 strings and the worst time is thrown out. But I was offered the option of cheating. I stated that that string counted and that I wouldn’t be taking any do overs. It required 2 stages to count for score. I shot that one stage and left and haven’t been back. FWIW, I took that stage without cheating. But there were other problems. No “safe table” where I could work on my gun and a ration of shit when I found a safe place to work on it. I had repeatedly asked for a safe table but they were clueless. I just don’t need any of that. Either a match is run correctly or I’m gone. I want to know that I earned where I am. I can’t imagine a worse feeling than to know that I “earned” my rank by, OK I’ll use the word, cheating, and I don’t want to be associated with a range that promotes it. When one goes to sleep with pigs one wakes up smelling like them and I don’t want that.

I do miss those matches

Robert is there no way you can shoot? If it’s due to a physical limitation they’ll make allowances and whatever is needed to accommodate. What a shame to give up competition if you enjoy and miss it.

When I need a wheelchair I’ll find a way to do it. But Steel Challenge only has one stage that requires any movement other than swiveling at the hips. If that stage comes up now I know my time will suffer. No big deal, I make up for it on the other stages. We all work with what we have and we really shoot against ourselves.

A bunch of years ago I shot a 1911 in USPSA Action Pistol but my eyes were aging and with iron sights I could no longer distinguish where the no shoot target began and the legal target stopped. I shot lots of no shoots and that just hurts the score. I gave up shooting. That lasted a few years and one day I told myself that I was going to shoot with an optic even if I put me in open division without an open gun. But no longer shooting just wasn’t working for me and that was going to come to an end. So I started setting up a gun with an optic and then USPSA started Carry Optics division which was tailor made of us old shooters with old eyes. Then they started PCC division which is where I am today. I’d have a hard time not shooting. It’s some of the best time one can spend outside of a bed.

Robert, I’m trying to convince you to look for solutions so that you can shoot. If you want to shoot they’ll help you find a solution.

they’ll help you find a solution

I have the muscle memory and fundamentals, but I’m just getting older. My vision is the biggest challenge for me these days. If I don’t make B Class this season, I’m perfectly content with an occasional sub 3-second time.

If you don’t know where to shoot just go to USPSA.com and find who near you shoots the matches.

You know how everyone behind you watching in the squad wants the current shooter to do good? Well, I’m one of those. I want to see you break into B.

You’ve got the fundamentals if you’re shooting in the 2s and 3s. Maybe a change in gear? Do you use optics?

When the times right I may, I do keep up on my memberships, USPSA/IDPA which are the only memberships to anything I have

Given my proximity to nothing I’m much more likely to create my own stages, but I’m not done setting up my homestead and buried in credit card debt so it wont be tomorrow

But thank you for the inspiration , now, wheres that hug emoji?

Maybe a change in gear? Do you use optics?

A lighter gun would help. I’m shooting a Ruger PC carbine, which is rather heavy. It has a Holosun red dot.

How far away are those targets Brian?