What's the fastest you been?

In a car bike tricycle or whatever.

I was riding in a friends Supra when he walked off and left a Suzuki Hayabusa( not sure of speed but it was scary fast ) it was stroked to 3.4 with a 100+mm turbo and more electronic fuel/boost gadgets than the space shuttle, did almost 1400hp on the dyno and ran mid 8’s in the 1/4, he used to win a lot of money doing roll on races against bikes…he used to go to the big meet they had in Texas every year for dyno, roll on and fastest mile, I think they still do them ? Texas 2K or something like that.

I’m thinking like 135 or 140 in a Supra. 2 lane road and passed a cop. I wasn’t driving but evasive maneuvers ensued and we were parked on a back street before he could turn around and find us.

I’ve had my bike (GSXR 750) up to 140+ several times when I lived in AZ. Group rides would get somewhat competitive out on the flat straightaways.

Got away with it.

I wasn’t the pilot. Fanjet flight with 100 or so other folks. Nothing major.

Next fastest, 100 some odd knots a few feet over wheat fields in a chopper, the pilot was from 'nam.

On 4 wheels, and I didn’t get it up to as fast as it would go, far from it. Maybe '71 in Dexheim, West Germany (Germany was divided at the time for all you youngsters). A friend had been a Fiat mechanic in the world and had a Fiat 124 that he had worked on. I backed off at 80 mph in 2nd gear. Yeah, I couldn’t believe it either.

Got from northern NJ to Watkins Glen NY in my AMX one night in under 3 hours. Speed limit? What’s that? we stayed over 100 for a really large part of the drive. No crazy stuff on the drive, just fast driving.

Edit: Oh yeah… One winter night in N’ NJ I decided to take a drive. Long story made short… I was on the 7 Lakes Pkwy in Harriman St Pk, the moon was full and bright and there was far too much snow in the forest so I knew there wouldn’t be any deer around for me to hit. Same AMX and I’d been driving it like a granny driver for too long (gas shortage of '73 I think it was). So I flipped on the 4 H2 bulb driving and fog lights up front and opened it up. I have no idea how fast I was going. It was a mountain road and I was watching the road, except when I would crest a hill and see headlights behind me cresting the hill behind. This went on for a bunch of miles, I’d crest a hill and so would those lights; that driver was keeping up. It had to be a cop. I got to the hamlet of Sloatsburg where the speed limit dropped to 25, so I slowed down. Yup, the headlights behind me caught up and I could see in my rear view mirror the reflective print indicating LE. The blues came on and I pulled over and shut it off. He came up and said,“Going a little fast back there weren’t you?”. I couldn’t deny it so admitted everything I started the story with. HE told me, “Yeah, I don’t get to drive as fast as I would like to either,” and I began to breathe easier. But what I didn’t write was that I had a .22 CO2 handgun in the rear where seats would have been had it not been an AMX. I was bringing it to the gunsmith in Sloatsburg for repair. He shown the light back there, saw it, and told me,“Get out of NY state and NEVER come back in with a handgun.”. “But, but… it’s only a CO2 pellet pistol!”. “The law makes no distinction, it’s a handgun and you aren’t a resident, it’s a mandatory 2 year sentence, now get outta here!”.

Yeah, I forgot that one.

I’d guess 500mph but its tough to say when they don’t let you in the cockpit, airbus can do over 700mph

pretty much matched that on one of my gsr’s, then thought about how bad my day could be with a squirrel crossing and slowly backed er down

I feel like us gingers should get the red label, the indians can have “featherbutts” or something

You shut your soulless Ginger mouth. Whiteman took all our land now you want my skin color too.

You shut your soulless Ginger mouth. Whiteman took all our land now you want my skin color too.

Hey now, the English oppressed Ireland fist. They might have threw blankets at you guys but they messed with Irelands potatoes…

72 Nova and have the tickets to prove it.

I was a rotten kid, been to traffic school twice, license taken twice. this ain’t all of them and i don’t know why i kept these. all the info has faded off them from the years in a hot attic. these are from the early 70’s mostly. the white sheet is an order to attend a driving class. 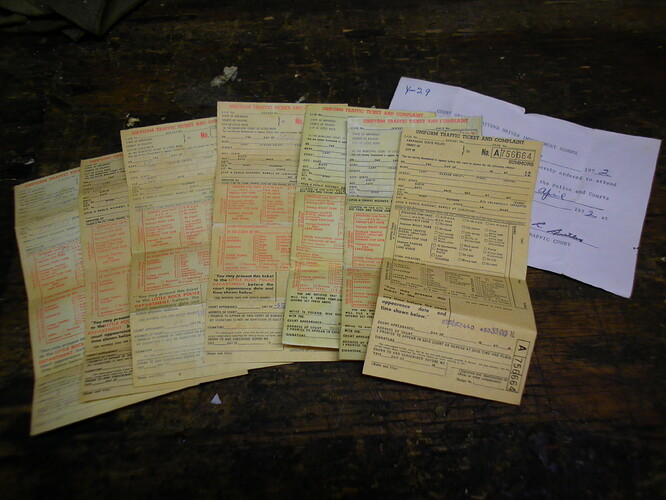 Youre ancient, one of those is made out to a 18th century horse carriage…

What happened to the ones chiseled in stone? Remember, the 2 you got for you & a buddy racing Ostrich Mimic Ornithomimids and blew through a Triceratops crossing?