What's the last handgun you had that you couldn't wait to get rid of?

For me I bought a Kel-Tec PMR-30 new last December mostly because I like the .22 WMR cartridge and thought about how much fun a range toy it would be + the fireball and noise it makes. Well my experience ended up echoing what everyone had said online and on youboob. Out of the dozen or so 30rd mags’ worth of ammo fed through it I only had one mag not have any FTF’s or other failures and the overall average failure rate of around 1 per 10rds or 3 per mag. I got compliments and lots of “wow that’s cool” at the range but as the owner it was a mess. I don’t like unreliable firearms so I decided to sell it and get what I could for it. If a firearm is unreliable then it serves no purpose in my opinion. Glad I did because by selling it I immediately bought my two Mosins at the same establishment on the way out. So in the end I scored. 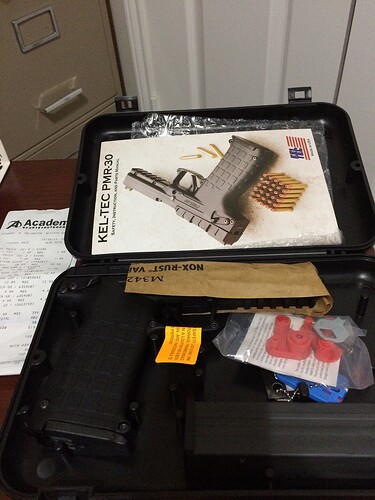 I would have to say A hi point 9mm…piece of shit made out of pot metal , I would rather take a slingshot with marbles then shoot one of them again.

True but their carbines are awesome.

You know…being a hi point fan is kind of like being A Taurus fan, you should never admit to it. Theres a joke about banging fat chicks that applies to what im saying here but I will show a little control and watch my mouth.

Not that I ‘waited to get rid of it’, but I let my LH9N MKII go due to limited support availability and virtually non-existent after market. 15 round-mags simply don’t cut it. Logistics is key to me and Lionheart is just too small to compete with the big household names. Became a big fan of the Jericho after having searched for a new high quality and all steel pistol. Mec-Gar CZ75B 19-rounders are compatible, Meprolight has Tru-Dot sights for it and Hogue has a finger grooved grip for it, so what’s not to like? Israel knows how to make a fine gun. Not that the LH9 is crap -it’s insanely good-, it just lacks a solid business model behind it. (Same thing with Walther btw). IWI is huge and very dependable in the support/logistics realm. Although their marketing is tacky, I definitely like their product!

This is a good topic to talk about! Years ago I bought my first Taurus 357 snub. I had bought it for such a good price I took it to the range right away. The pistol couldn’t make it through a 5 round cylinder without having problems with timing, sent it to Taurus…Taurus sent it back and informed me that they had fixed the timing issue. Went to the range again and the little .357 still could not shoot a full cylinder. Out of all this I learned that the old saying about “you get what you pay for” still holds true today. Mister_Torgue good topic, I have a friend that went through the same ordeal you did with the same Kel-tec. I wish more company’s took better care on the reliability side of things even if it cost the consumer more.

I have a friend that went through the same ordeal you did with the same Kel-tec. I wish more company’s took better care on the reliability side of things even if it cost the consumer more.

That’s a shame. I agree with you on the QA. Like you I would be happy to pay a little more to get a quality product that had been thoroughly tested.

I almost bought a Taurus 85 snubnose for the nightstand. Maybe I shouldn’t? It seemed like it was a decent product and had good reviews.

Are these issues with Keltec limited to just that pistol or is all their stuff sketchy? Ive looked at the KSG and really want to like it

I hate recommending company’s that don’t make all there products 100 percent to the best of there abilities, but with that said I would recommend a Ruger sp101 for that application. Some others come to mind, but I know price is sometimes a motivator. P.S. have you ever read a bad gun review? they are rare Brother.

I chose the UTAS 15 over the KSG when they came out. For what it’s worth I read some people where unhappy with them. Having said that I myself had to return my UTAS 15 back to the manufacturer twice before they worked all the bugs out. I think that if you have more moving parts there is just going to be a larger margin for a possible malfunction in my honest opinion. I wouldn’t blame you for getting a KSG, I think they are cool too!

Are these issues with Keltec limited to just that pistol or is all their stuff sketchy? Ive looked at the KSG and really want to like it

Not sure about the other handguns but the PMR-30 and their bullpup 12ga (KSG) are unreliable that I’ve seen.

hate recommending company’s that don’t make all there products 100 percent to the best of there abilities, but with that said I would recommend a Ruger sp101 for that application. Some others come to mind, but I know price is sometimes a motivator. P.S. have you ever read a bad gun review? they are rare Brother.

Thanks for the suggestion. I like S&W but not at their inflated price point. I’ll take a look at the Ruger.

And yes, mostly good reviews are out there but most of those are from the larger channels/groups that receive them from a gun shop/site for the test so you can usually filter those out. The regular people like you and I are who I would probably take more information from now on. That and my own experience renting them or find someone with what I’d like to try out.

I won a Ruger security 9 at a NRA banquet last Thursday night and sold it the next day.I just don’t like the safety or slide release on the Sr series from Ruger.

I agree with your observations about the security 9. Now the fun part to get what you want!

I would love a Hudson h9 or a Springfield emp 4.

In my opinion I would vote for the Hudson H9. For political and moral reasons I can not vote for a Springfield until the company is sold to someone who supports the 2nd amendment and the ability for the civilians to own firearms. I apologize for a harsh vote and will step off my soap box. Happy hunting for a new H9! I know i would like to shoot one!

Mine was my first handgun back in my early 20s. It was a cheap 380 auto. Never made it through a full mag without issues. That gun actually gave me nightmares about someone being in the house and it jams on the first shot. I sold it for $35 and added that to my shotgun fund.
On an ironic side note, that gun did convince a guy, intent on robbing me, that he had some place else he needed to be

I must be lucky, at least in this regard.
I’ve only ever suffered one lousy handgun and one rifle.
Everything else has been just fine.
The handgun was an Italian clone of a CZ .45.
For the first 500 rounds, it ran perfectly.
After that it slowly deteriorated into a totally unreliable piece of crap.
By the time it got to 1,000 rounds, it was useless.
I was able to trade it to a gunsmith, (with total disclosure) for an old beat up but surprisingly very good shooting rifle.
Lost a lot of money, too.
I would never ever consider buying anything else from that company.

The Biggest POS handgun that I got rid of was a Ruger SR45, that POS broke on the 5th round fired through it, the mag release broke and locked mag in pistol…sent it back to Ruger, when I got it back it would not lock slide to rear on last round fired with either magazine…sent it back again and they replaced a bunch of parts, repair sheet said they fired 50 rounds with no malfunctions…took it to the range and it broke again…called Ruger and asked how they fired 50 rounds with no malfunctions and it broke again before I fired 10 ? they had no answer…sold the POS to a guy who wanted it knowing the problems, will never own another ruger SR pistol…

I wouldn’t bother with the H9 at all due to its pathetic accuracy. EDC X9 is the way to go if you’re looking for a 1911 style 9mm pistol.

That is why I don’t have one yet I am hoping they work out the accuracy issues. I can only go around $1200 so Wilson and any customs are out.