When the FBI need to unload

https://globalnews.ca/video/4250361/fbi-agent-who-had-gun-discharge-while-dancing-released-to-fbi-supervisor/
must not have been a stock glock trigger

Only he was professional enough to handle that pistol.

Wow. That is rediculous. I was worried in the beginning they were going to stay with “it went off by itself” when clearly he fat fingered the fun switch.

@srdiver,
He should have had a remora holster, the gun would have never came out, at least according to Remora you can do backflips with your gun on you!

Very true. My holster is just simple horsehide with no locking retention… Even that would have held it without issues. Maybe he was running a blackhawk! Lol

I didn’t hear in the video or not, did he lose his job?

I dont think it was mentioned. If he was trashed I hope so. Everyone is human… but you really want to think feds wouldnt make a mistake like this

It’s lucky he didn’t kill somebody.

I know right? And he walked away! Wtf? Isnt it not legal to carry in a bar? Or is that just for us simple folk who only shoot twice as much as their guys do?

If he is fbi he’s Federal that means he can carry anywhere as long as he’s on the clock.

Why is he dancing at a club while on the clock?Way to spend our tax dollars

That’s exactly what I was thinking, look how we threw up his hands in the air.

Did they say he was on duty? Not that it matters. Still should have left the piece in the car.

Ya. It would have just gone off by itself.

@Caw,
AR 15, he had it Crotched, I’d like to see that, i wonder if anybody has tried that before? Actually nothing would surprise me, There’s a video on YouTube of an officer, at a primary school talking to students about gun safety, He shoots himself in his thigh, in front of the whole class, on camera!

I would have liked that… but… 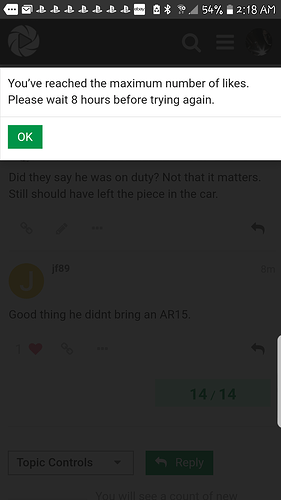 Ya ive seen that one. He had his finger in the trigger guard as we was holstering. If he knew he was going to have it out…In a class of kids…why did he not un chamber the round???

There’s all kinds of so-called professionals out there that have no business with a gun and the responsibility that comes with serving the public. There’s an idiot around every corner nowadays.

This guy surely should not be carrying a gun.

@DOSE_OF_FREEDOM,
If he is FBI he’s required to be armed at all times, he would actually get reprimanded for not having a weapon, whether he’s on the clock or not.