Make sure you use the better ammo variety: brass Yugo milsurplus fmj, barnaul milspec fmj, wolf and wpa fmj/sp/hp, golden tiger fmj-bt, silver/brown bear soft -and hollow points. Stay away from everything else.

This is a cost effective and very nice bolt action familiarization setup to start with and will give you plenty good accuracy out to 400m, perhaps 500m depending on climate conditions and where you live.

@noel0732
Well for the most part now days almost any new bolt action will get you there.

A Ruger Predator in 6mm Creedmoor will fill the bill, Low recoil to keep eye in scope and if you reload it has great ballistics. I would suggest a Mil/Mil FFP scope at lest 20 power…Athlon has some good beginner scopes around $500…IF you do not reload nor plan too ? a 243 or 6.5 Creedmoor will offer a lot of good factory ammo, 6mm Creedmoor factory ammo is not as broad yet…

Tikka, they have a smooth-as-silk action and are a great base to build on they are Sakos budget line, start with a .308. A .22 or .223 would be a better first rifle but going off what you asked a .308 Tikka would be one of your better options. If youve got the coin you could find a used Sako and have one of the best period. Other then Tikka I like Savage alot too , I cut my teeth on a short Savage 110 in .308.

@switchpod @rjburk @Caw @Chuparosa Guys, he’s a totaal noob! Let him start with an entry level gun that uses cheapo ammo in order to familiarize himself with the works of a bolt action rifle. He can always move on to something more pricey and longer range at a later stage. What you guys are mostly suggesting are Dior priced rifles and caliber that shoot out to distances far beyond a rookie’s ability. He needs to learn to shoot first.

Mr. Noel wanted all our opinions, so I believe he got just that. My Tikka set up cost me $600.00 with scope. In my opinion that is fine for a beginner. I know I wish that that rifle was my first. This will be my 31st year shooting and I have a few beginner rifles that I wish I didn’t buy. It would have been nice if the internet was around, or as popular as it is now for me to ask the same questions Nole is asking. It could have saved me some money in the long run. In the end he will buy what he wants.

Tikka or savage in .308 then. Its what I learned on and I hunt with. The Ruger 10/22 would be the best first rife though.

I’d suggest the Rugar MVP Predator. Uses .223 / 5.56 ammo and the same AR type mags. I added a Redfield scope and a bipod. Personally I think it’s a great inexpensive starting point. Just my opinion. I’m no sniper though. 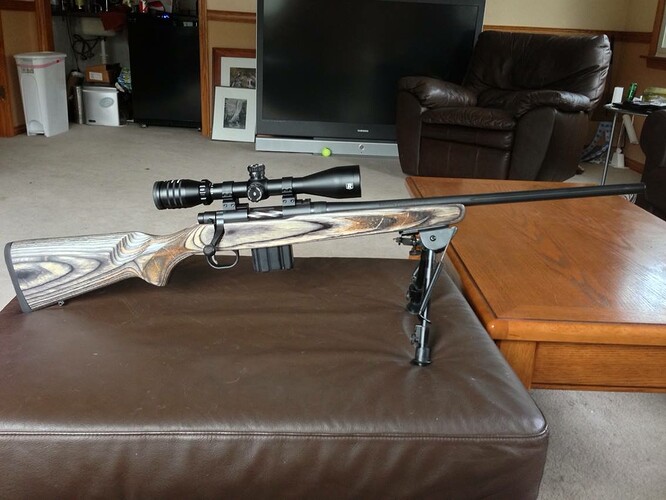 True. Maybe I should have held my horses as I never figured Tikka rifles are actually that affordable. I thought Tikka=Sako=Beretta being a premium brand they would come with a price tag. Again, I’m not really in to precision rifles and perhaps should have consulted with my sister first, as it’s more her thing.

I only paid $550ish for my Tikka it was used though. I regret selling her

At this point any opinion is great for me, because the only long range rifle that I know of is Remington 700. And, most of the review I read/ watch is that Remington 700 is not a good beginner rifle.

You might want to avoid anything Freedom Group ownded. Remington isn’t what it used to be. Just a little bit of friendly advise.

My budget is around $500-$700 and I don’t plan on using the rifle for hunting. Caliber wise I don’t know much about it but i do know any caliber that is bigger than 308 is for sure not for me.

You’re right! I’d vote for any Savage then. Great rifles for the money.

Agreed. Rule of thumb with Savage is to avoid the older stuff. They had QC issues 10/15 years ago but are GTG nowadays. Their rifles tend to have rather low capacity though as it’s usually limited to 4 rounds or so, whereas the Ruger American Ranch allows for capacity up to 20 rounds. http://shopruger.com/Mini-Thirty-20-Round-Magazine/productinfo/90338/

Exactly. I’ve heard that as well.

I’m rather keen on this Savage myself. I hope to get one at some point. And it has a 10rd mag so you’re good to go. Not a bolt gun but a fantastic rifle for the price.

Go ruger,10-22 everyone should have one.!after that ruger american6.5 is nice free float for the money too start out that should keep you busy without makeing you broke
Be advised gun are addictive(ive the sickness)and youll get it to!

I’d highly recommend a Savage in 308. If possible, get one with a threaded barrel so you can add a brake if you don’t like the recoil. I suggest the .308 since there is probably more easily accessible data, ammo, reloading components for long range shooting than just about any other caliber out there. It’s also easy to find scopes with BDC reticles that match the round, and at an affordable price.