Workin' on a special match

I’m the idea guy. I’m probably not going to be the coordinator of the actual match.

I shoot SBRs in competition and frequently someone will comment on them and ask about arm braced handguns and shooting a can in competition. Both of which aren’t allowed in the competitions I shoot. A stocked handgun isn’t a handgun or a rifle, and a can really screws with the e-timer that needs sound to function.

But that got me to thinkin’ (Look out!). I’ve wanted to use a can (silencer, suppressor) in competition for years. I have other guns that I’d also like to use and can’t because they fall outside of what’s legal for competition purposes. So I contacted one of the movers and shakers at the matches I attended this past weekend. And he (“Jeff”) really liked the idea. During the match I talked to the president of the club who happened to be our RO. He saw nothing wrong and gave the go ahead. So it appears other than the actual details that have yet to be worked out, it’s going to happen.

Timing could be a problem but “Jeff” suggested setting up the stages and use a par time. Whatever targets got hit would count for score.

So what is OK for the match? Cans, arm braced handguns, SBRs, SBSs if we can figure out a suitable stage, MGs, basically, if you bring it you can shoot it. A local company might set up a 1919MG for folks to buy a belt of ammo to shoot. As “Jeff” suggested, lots of local folks have all sorts of stuff since we live in a free state, so we might see faces that we’ve never seen before. We also have a local MG society and it wouldn’t surprise me if some of them show up. I can see limiting the MGs to pistol calibers and rifles to subsonic loads to save the steel.

I shoot for fun and I think this will be all sorts of fun.

Where is this special match located.

Convenient to most of the USA (cough, cough), in central Maine.

No date set yet. Maybe this year before snow flies and it’s -20°F, or wait for next spring? No one knows yet. The match has absolutely no flesh on it yet. Too, maybe it’s too much to call it a “match”. Maybe calling it a shoot would be more accurate since at this time there are no divisions. Of course friends could shoot against each other using the par scores.

I don’t know if there will be guns for rent or not. That would be up to the owners. I know “Jeff” doesn’t want to allow SMGs to be available for rent (I concur). They’re just too easy to move in directions no one would want.

Edit: I also don’t see if happening for more than just one day. I posted this mostly to get mental gears turning for folks in other sections of the country.

…a can really screws with the e-timer that needs sound to function.

Interesting. Of course, there’s still a sound when using a suppressor. But you’re saying it’s not enough for the e-timer to function?

I like the idea of having a suppressed match. Only thing I’d suggest looking out for is cans coming loose and someone having a baffle strike.

Interesting. Of course, there’s still a sound when using a suppressor. But you’re saying it’s not enough for the e-timer to function?

That’s correct. Most suppressors I can see being a problem for the timer since it works off of sound. Even an unsuppressed .22 can be a problem. On Saturday a gent was shooting a 16" .22 and he had a number of reshoots because the timer missed sometimes an entire string and displayed a zero time. There’s only so close the person with the timer can get to the muzzle. The sensitivity can be adjusted but if someone is shooting in the next bay that can register and throw off the timer. Par time does away with any requirement to register the sound of the shot. They get a start beep and an end beep and anything that they shot gets scored.

I was thinking of that also for threaded cans. Maybe allow them what they need to heat the can up for final tightening. I have one like that so it’s a consideration for me too. We’re not going to allow anyone to tighten a can on the clock and with ammo in the chamber or magazine. We’ll figure something out. Maybe 2 par times for the first stage. During the break between par times the firearm is made safe and tightening allowed. That’s just an off the top of my head solution. But ultimately it would be up to the shooter to operate his/her gear and to know if the can got hot enough. More rounds could be fired to achieve that if required. Or just fire rounds at something that needs holes in it and no par time to heat the can up? Again, just thinking.

I’ve never used a timer, but that makes sense. The par timing seems like a good workaround.

I use PTFE anti-seize tape for thread protectors when running unsuppressed. Never thought to run them with the can on as I don’t shoot a rate of fire to really get it good and hot. Maybe it would work to keep things tight during a match? Says it’s good up to 550 degF: 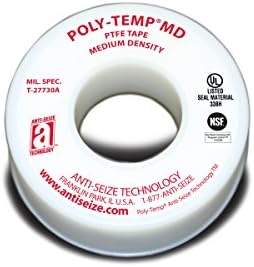 EDIT: Err, well now that I think about it. I never ran the tape suppressed due to concerns about it potentially affecting concentricity. I’ve no evidence to that being an issue however, just an extra precaution I take.

just be advised that the tape would most likely be burned off by the first rapid fire when using a a can - the claim being a thread sealant is a misnomer - it is prevent the transfer of process (fluids/gases) from traveling along the threads and leaking - not securing. That would be a “thread locker”
If you can twist it on - and do not require a tool to remove than it can still twist off by it’s self.

I rarely get my cans hot enough to do this, but supposedly once it’s hot just tighten it up again and that’s it. It’ll stay in place after that, supposedly. Yeah, I’m not filled with confidence that it won’t still unscrew.

Yes, on the concentricity issues with PTFE tape. Plus get it hot enough (~800°F) and the gasses given off are toxic. Besides I use grease on the threads on my direct mount cans to make sure I can remove them easily later.

I use thread locker of some type, mostly Rocksett, on permanent mounts, but never anything other than grease on a mount that isn’t permanent. Thread locker on threads, once removed and reinstalled can result in concentricity issues just like the use of tape would have. Removing it to regain concentricity is more of a problem than I want.

FWIW, due to the timing of the idea for the match being so late in the season it was shelved until next year. But we have the go ahead to do it.

if the treads of the barrel are cut parallel to the bore and centered even with a huge amount of tape wrap you would not lose the concentric aspect - being even a 100th off of center would not effect the can - they are not made that precise.