I find it hilarious how fat and heavy this Glock 20 is.

Sitting next to my Canik TP9DA which itself a bit fat and heavy is quite a thing. There is no way someone could carry this out in civilization concealed right? It’s got to just be a brush / wilderness firearm yea? Fully loaded it weighs as much as a large stone from Stonehenge.

Just look at this piggie! Haha. I still like it enough but there’s just no way is use this for my CCW. I’ll stick to my Star BM and Canik. 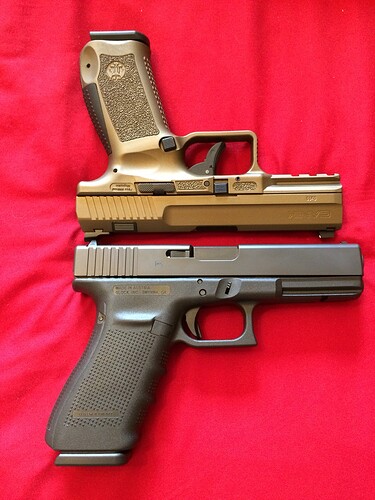 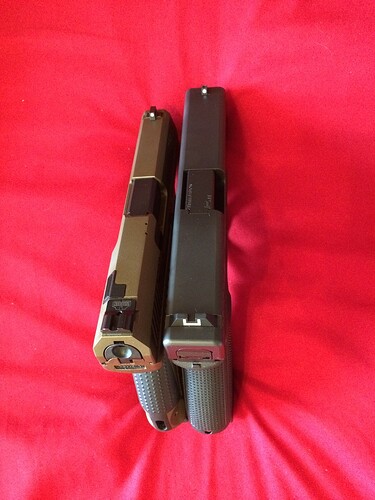 Its not a girly gun

Hah. Neither is my Canik.

Wow, it is big. Almost makes the Canik look like a 380

I was shocked simply because the Canik is the largest handgun I owned up until now. Just for shits and giggles, peep this… 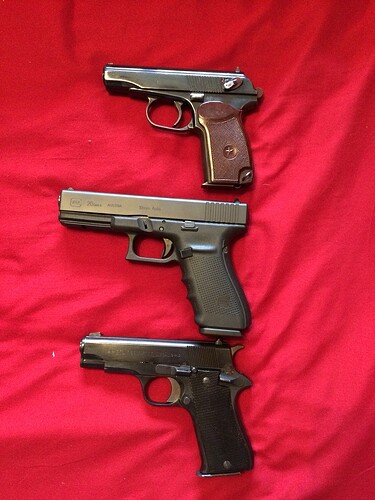 That’s why they have occasionally been called a Block

Kinda like trying to shoot a chunk of 2x4…

10mm is a hefty beast
I’d carry it but that’s me
Have fun with that
This is the pistol you were going to convert to 9x25 ?

@Chuparosa when you die can my 9 year old daughter have your canik? Once she’s 12 I’ll let her have a real gun.

Your humor escapes me.

This is the pistol you were going to convert to 9x25 ?

Installed the new recoil spring+guide rod and barrel. Now just need some ammo and free time to head to the range.

Sorry was meaning you can’t expect a 10mm Pistol to be the same size and weight as similarly constructed 9mm. The G20 for a full size 10mm is as light and compact as they get. And when compared to other popular 9mm metal frame double stacks it’s smaller.

I’ve carried either a G20 or G40 as my primary CCW since 2005. Holster makes a difference. Well and having above average sized hands, I can’t palm a basketball or anything.

I realize 10mm is bigger and heavier, not a noob. I was just surprised how much larger it actually is once I got it home and compared it to my other tupperware pistol. In the store sitting next to other Glocks it did not give me an impression it was that much larger (other than the G40).

Keep in mind I’m used to steel frames & milsurps and such so it is a bit of a shock to have a plastic pistol this large and heavy. Haha. Also, my Canik holds 18rds so I thought it had enough weight as-is for a plastic pistol. Guess it doesn’t.

There is no way someone could carry this out in civilization concealed right?

When I first started carrying, I had the typical worries about printing or slipping up and exposing part of the gun or holster. Of course, people that I knew, who had already been carrying for a few years, told me I was worrying for no reason, since most people wouldn’t notice even if I was being very sloppy about concealing the gun.

I decided to test their claims. I will admit up front that this was during the winter, but I carried a full-size, steel framed 1911, a model 92, and a Makarov, along with two spare mags each for the 1911 and 92.

It took two weeks before a coworker noticed that I was carrying a gun (he didn’t notice the other two).

I wouldn’t try that in the summer, though.

I ran a G20 my first few months of IDPA, definitely a lot of questions, comments, and even stunned looks when the pasties would blow off the point blank targets

rounds were 40-50 cents each, that I could deal with but tumbling rounds …no.

This is why I’m going to get an aftermarket 10mm barrel with the proper twist rate when I shoot 10mm with it.

I ran a G20 my first few months of IDPA, definitely a lot of questions, comments, and even stunned looks when the pasties would blow off the point blank targets

rounds were 40-50 cents each, that I could deal with but tumbling rounds …no.

I’ve owned and carried a G20 and G40 since 2005 and 2016 respectively. I’ve expended 15,000 something 10mm rounds through them from handloads to almost ever brand of ammo out there. Never had a single round tumble.

I’ve owned two and both did, its only the score examination/setting of IDPA that revealed it but it was there with both,

cardboard silhouettes, perforated score lines and competitors make it much easier to see

much, not all, of my ammo came from LAX but I could never pin it to that

I believe my friends does as well but not saying that 100% as we’ve not shot together for awhile.